Piston Cup Racing Series (known as Hudson Hornet Piston Cup circa in 2010 and 2013) is an American auto racing series championship in most of time of stock cars. Circa 2016-2017 in race started dominate high-tech generation of racing cars.

=== 1960s-2004 seasons ===In later seasons there was started using speedways with hard surface and started racing stock cars created for the needs of the competition. In late 1970s Kraig Shiftright won 2 seasons and Klint Shiftright won 3 seasons in early 1990s. Haul Inngas won most likely in 1990s or 2000s and Strip Weathers won 7 times in 1980s-2000s

At the Dinoco Light 350 in the Motor Speedway of the South, Lightning won the race. In the next race at Rocker Arms International, McQueen and Cal both went for first place at last lap with Cal being the winner. The Georgia Motor Speedway race was won by McQueen. At the Dinoco 400 at Copper Canyon Speedway, McQueen was in the lead with Bobby second and Cal third, but all three were beaten by rookie Jackson Storm. Storm also won the next races at the Motor Speedway of the South, Grandol Oil Co. Raceway, BnL Raceway, and Rustbelt Raceway. After the last one, Cal Weathers retired from the sport, racing by the tip of his uncle, and many other veteran racers leave the sport too, leaving only a handful remaining. 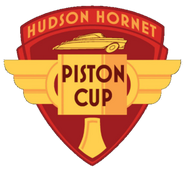 Retrieved from "https://worldofcarsdrivein.fandom.com/wiki/Piston_Cup_Racing_Series?oldid=128468"
Community content is available under CC-BY-SA unless otherwise noted.