The Pit Crew was the crew of race cars in The World of Cars Online. While in the gameplay, cars where controlled by the administration of the game servers.

The leader and the fastest car in the group was Fluffy while Dashing was the slowest. There was once a rumor in The Lexi Lowdown blog that Wacky was Chick Hicks' minor. Cars that where members of the group had tag "PIT CREW" visible before their name and did not had surnames. 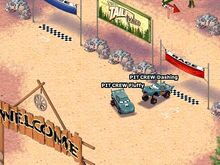 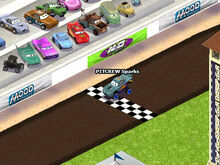