Cars 3
Ponchy Wipeout is a former professional race car who raced for the Bumper Save team in the Piston Cup Racing Series with number 90.

Ponchy Wipeout used to work as a stunt-double. While he was working on set for film HighJinx has been noticed recruited to be a professional race car. After that he started racing in Piston Cup Racing Series for Bumper Save team with number 90.

In Cars, Ponchy raced in the 2005 season including the final race at the Motor Speedway of the South. with his crew chief, Ben Doordan giving him orders during it. During the race, Chick Hicks caused an accident in an attempt to further his lead on Lightning McQueen, which Ponchy was involved in, and was seen hitting Ruby Oaks. Although Ponchy received some minor damage, he was able to continue racing. During the last leg of the Dinoco 400, Chick Hicks shouted at him "Come on, come on, come on!" annoying Ponchy.

In Cars 3, he competes in the 2016 Piston Cup season, against many Next-Gen racers. He can still be seen racing at the Los Angeles International Speedway, and after that, he gets replaced by a next-gen racer named Paul Conrev.

Ponchy is a Brawny Motor Co. Spark GT, based on a Dodge Intrepid. He uses Lightyear racing tires. He has a blue and white livery with a red and white 90 on his doors, his spoiler is orange. In Cars 3, Ponchy's design goes through some small changes, most notably his model, as he is now a Capitol Motors Mark II, like most of the returning racers from Cars. He now has yellow rims instead of black rims and his spoiler is also light-blue. Other changes from his design from Cars to Cars 3 is the Bumper Save logo no longer being horizontal on his hood, the number 90 being place under his right headlight and his grille no longer being two-pieced, rather just singular. He also has the word "Lightyear" above his front tires on his front fenders.

Ponchy, Kevin Shiftright and Crusty Rotor in the crash 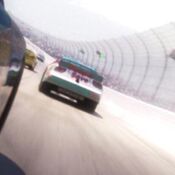