Ponchy Wipeout is a professional race car who races for the Bumper Save team in the Piston Cup Racing Series. He is a Brawny Motor Co. Spark GT with a blue and white livery, and his racing number is 90.

In Cars, Ponchy competes in the 2005 Piston Cup final at the Motor Speedway of the South. During the race, Chick Hicks causes an accident in an attempt to further his lead on Lightning McQueen, which Ponchy is involved in and is seen hitting Ruby Oaks. Although Ponchy receives some minor cosmetic damage, he is able to continue racing, but loses to a three-way tie between McQueen, Chick, and Strip Weathers.

In Cars 3, Ponchy competes in the 2016 Piston Cup season, against the likes of many next-generation racers, such as Jackson Storm.[1] However, after Los Angeles 500, Ponchy either retires or gets fired by Bumper Save and gets replaced by a next generation racer named Paul Conrev for the 2017 Florida 500.

Kevin, Crusty and Ponchy in the crash 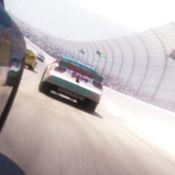 Ponchy in the Cars 3 Teaser Trailer.

Retrieved from "https://worldofcarsdrivein.fandom.com/wiki/Ponchy_Wipeout?oldid=135981"
Community content is available under CC-BY-SA unless otherwise noted.