Pope Pinion IV (also known as The Pope) is a character in Cars 2.

The Pope is a white car and the leader of the Catholic Church. For his public appearances, the Pope uses the Popemobile, a truck transporting him in a glass box. He is first mentioned in a scene where Finn McMissile asks Mater if the Hugos and Trunkovs are considered Lemons, to which Mater replied "Is the Popemobile Catholic?" Later in the film, Pope Pinion is seen in his Popemobile at the World Grand Prix race in Italy.

The Pope is a white car that wears a large diamond-shaped hat colored white and gold. He is accompanied by his own Popemobile, a large white car that carries a large square dome that shields the pope from potential harm.

The Pope seems to be based on the US-spec BMW New Class coupé.

According to the die-cast, his license plate reads SCV1. 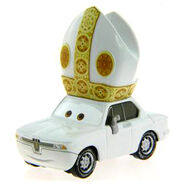 Diecast
Add a photo to this gallery
Retrieved from "https://worldofcarsdrivein.fandom.com/wiki/Pope_Pinion_IV?oldid=141020"
Community content is available under CC-BY-SA unless otherwise noted.