The Porto Corsa Circuit is a racing circuit. Porto Corsa hosted the second round of the World Grand Prix. The circuit starts from the port, along a spectacular road, rises and then falls, then passes on the huge Casino Bridge, and then returns to the port. 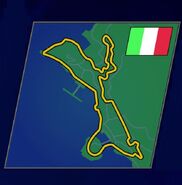 The incredible hairpin, inspired by the Loews hairpin of Monaco.

The climb section after turn 1

Add a photo to this gallery
Retrieved from "https://worldofcarsdrivein.fandom.com/wiki/Porto_Corsa_Circuit?oldid=150853"
Community content is available under CC-BY-SA unless otherwise noted.