Professor Zündapp, more commonly known as Professor Z, is the main antagonist of Cars 2. He was a mad scientist, before his arrest in London.

Professor Zündapp, aka “The Professor,” is an internationally wanted weapons designer in a small, sophisticated German package. He is a brilliant, but mad monocle-wearing scientist who is plotting to sabotage the World Grand Prix. Though his true motive is unclear, Professor Zündapp is willing to do whatever it takes to eliminate all obstacles and keep the “project” on schedule.

During the film, it is learned that the Professor is not the main antagonist nor is he the leader of the lemon cars. As it turns out, he is actually working for Miles Axlerod, who he thinks is a mastermind lemon, since Miles disguises himself, but in the end, he becomes the true leader. Since Professor Zündapp is a scientist, Miles has him invent an electromagnetic pulse device which is disguised as a World Grand Prix camera, to use on the racers that use the gas Allinol. This was all part of a plan to turn the world against alternative energy and have all cars rely on gasoline, bringing profits to the lemon cars and himself due to the fact that they own the largest untapped oil reserves in the world. In the end, Axlerod isn't working for Professor Zündapp and the Lemons anymore.

At the end, Professor Zündapp is tazed by Holley Shiftwell. It is unknown what happened to him, other than he was arrested.

In Kinect Rush: A Disney/Pixar Adventure, in the first Cars level of the game, Professor Z appears on pictures that the player has to hit to get extra points when a new goal is unlocked.  In the second level, he is heard talking as he tries to stop the player and Holley Shiftwell from deactivating the bomb on Francesco Bernoulli. He makes a physical appearance in the third level. He is in the helicopter with a convoy of trucks full of bombs. Throughout the level, he tries to stop Finn McMissile and the player from finding out where the bombs are being taken. In the ending cut-scene, he shoots a missile at the player while in midair, but the player dodges the missile and pushes Professor Z out of the helicopter before the missile hits the helicopter. Finn asks Professor Z if everyone is all right in there, only that he replies saying no thanks due to Finn, who then says, "No thanks required, mate. All in a day's work." When the level is completed with the player seeing their score and what they unlocked, Professor Z is seen with a parking boot, as to prevent him getting away.

Professor Z is evil, as noted by his attempt to sabotage the World Grand Prix. Several bios state that he is also a mad scientist.

Professor Z is painted two different shades of green, light and dark. He also has a large monocle that he wears over his windshield.

The Professor is based off of a 1957 Zündapp Janus (as his name suggests), a micro-car in which back passengers sit facing backward. He has a top speed of 50 mph (55 mph downhill), which could be reached in 12 seconds. His engine is a 2-stroke single cylinder 250 cc, with a horsepower of 14.

Professor Z is a mad scientist, bad to the bone. He is currently residing in the London prison.

Mater: "Let me go!"
Professor Z: "You actually care about that race car. A pity you didn't warn him in time."
—Mater gets put tied up and put in the lemon's truck.

Professor Z: "You! Why didn't my death ray kill you?!"
Lightning McQueen: "Death ray?!"
Finn McMissile: "Turn off the bomb, Zündapp!"
Professor Z: "Are you all so dense? It's voice-activated. Everything is voice-activated these days."
Mater: "Deactivate! Deactivate!"
Bomb: "Voice denied." (the bomb activates to explode in 5 minutes)
Mater: (gasp)
Professor Z: "Woops! Did I forget to mention that it can only be disarmed by the one who activated it?"
Holley Shiftwell: (unfolds shock guns) "Say it!"
Professor Z: "Deactivate."
Bomb: "Voice denied." (a minute was taken off the timer)
Mater: "Wha...?!"
Professor Z: "What? I'm not the one who activated it. Would anyone else like to try? Ah!" (gets shocked by Holley's shock guns)
Finn McMissile: "You read my mind."
Holley Shiftwell: "He was getting on my nerves."
—Lightning, Mater, Finn, and Holley force Professor Z to deactivate the bomb. 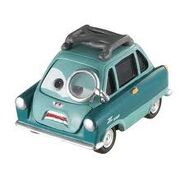 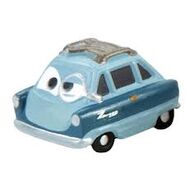 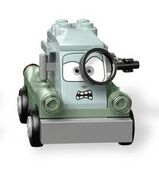 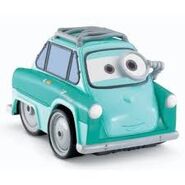 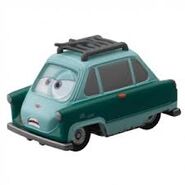 Tomica
Add a photo to this gallery
Retrieved from "https://worldofcarsdrivein.fandom.com/wiki/Professor_Z%C3%BCndapp?oldid=51105"
Community content is available under CC-BY-SA unless otherwise noted.