Pushover is a demolition derby car who competes at the Crazy Eight. His number is 16. He is painted orange with yellow stripes, and has a "mouth" painted on his sides, and a white bumper.

In Cars 3, for the beginning of the demolition derby, he is mostly seen next by the disguised Lightning McQueen. Later, he is pushed by Fishtail on top of Arvy Motorhome. In a couple of shots, he can be seen next to Arvy, with both of themselves on their side. 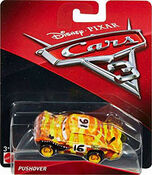 Retrieved from "https://worldofcarsdrivein.fandom.com/wiki/Pushover?oldid=142864"
Community content is available under CC-BY-SA unless otherwise noted.