Radiator Springs is a small town along Route 66, located in Carburetor County. It is a town where Lightning McQueen ends up after accidentally destroying the town's main road.

Radiator Springs was founded by a steam car named Stanley in 1909, and a statue of him is outside the town courthouse. Later, Stanley married Lizzie. After Stanley died, more people came to live in Radiator Springs, and the town grew. It was a popular rest area where almost all cars would stop to shop and fill their gas tank. However, in the early 1960's, Interstate 40 was built near Radiator Springs, which greatly decreased traffic for Radiator Springs, since the Interstate bypassed the town. Finally, in the mid 1980's, Route 66 was decommissioned.

In 1954, famous Piston Cup racer Doc Hudson suffered a massive accident that found him in a hospital for several years. Around the 1970s, Hudson fully recovered and returned to the Piston Cup; but found that the sport had left him behind because of new-comers, sponsors, the money had been spent, and the competitiveness in the races had grown. Hudson felt like nobody appreciated him anymore and retired completely from the Piston Cup before vanishing off the face of the Earth. Eventually, Doc Hudson found shelter in Radiator Springs. His wisdom tough grandpa-like attitude earned him respect from the town enough that in the late 1980s, Hudson was hired as mayor, judge and the CEO of the town.

In 2006, famous racecar Lightning McQueen destroyed the town's main road in a hurry to get to a Piston Cup race in Los Angeles, California, and was arrested for 5 days to fix the road. Lightning soon became friends with the Radiator Springs populace, and after his race, he set up a racing headquarters in the town, and the town started to grow again.

The location of Radiator Springs is not known exactly; however, it is most likely in eastern Arizona, along Route 66 and in the Monument Valley. 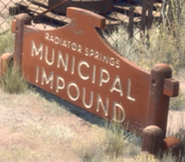 An aerial viewpoint of the town.

Radiator Springs, the gateway to the Ornament Valley

Add a photo to this gallery
Retrieved from "https://worldofcarsdrivein.fandom.com/wiki/Radiator_Springs?oldid=50991"
Community content is available under CC-BY-SA unless otherwise noted.