Not to be confused with the characters.

Radiator Springs Racers is the biggest attraction at Cars Land. It is 6 acres big out of the 12 acres total, half of Cars Land.

While waiting in line, guests walk through Stanley's Oasis. When it becomes their turn, they get into a car, which can come in a variety of different colors. Sheriff gives the safety procedures in English while Ramone says them in Spanish.

The ride starts with a ride through Ornament Valley. The car go through a short tunnel and a waterfall appears at the other side. They enter another tunnel, which is dark. Mack suddenly will appears in front of them, so the vehicle swerves out of the way. Then the vehicle swerves around Van and Minny and crosses train tracks right before a train comes. Sheriff pulls them over, not to give them a ticket, but to welcome you to the big race. He tells them Mater will take them to the race. Mater shows up takes the vehicle tractor tipping. Frank wakes up and chases Mater and the guests to Radiator Springs.

The guests arrive in Radiator Springs through Flo's V8 Cafe where they see Fillmore,Sarge, Lizzie, and Red. Lightning and Sally welcome the guests to the race and tell them to go to either Luigi's Casa Della Tires or Ramone's House of Body Art. If the vehicle goes to Ramone's House of Body Art, Flo tells Ramone that a customer is coming and Ramone uses an air brush to paint the car. For Luigi's Casa Della Tires, Luigi welcomes the guests while Guido changes the car's tires to whitewalls, then they both head to the starting line. For both sides, the car enters another room where Doc Hudson is on a a crew chief stand and wearing a headset. He gives the guests racing advice, saying that new tires or paint is not enough to win the race. The two cars line up at the starting line where Luigi and Guido start the race. The race goes outside the darkened section, around Radiator Cap Mountain, around Willy's Butte, across the finish line. Doc congratulates the guests for winning before they enter Comfy Caverns, where Mater and Lightning congratulate the guests.

Buckle up at Radiator Springs Racers and compete with other speed seekers! Zip over hills, zoom around banked turns and cruise down straight-aways past the spectacular red-rock formations of Ornament Valley. Some of your favorite friends, like Sally, Luigi, Guido, Mack and Ramone, can be seen at the track. 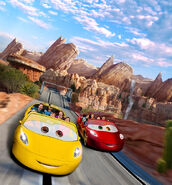 Poster
Add a photo to this gallery
Retrieved from "https://worldofcarsdrivein.fandom.com/wiki/Radiator_Springs_Racers?oldid=118667"
Community content is available under CC-BY-SA unless otherwise noted.