Ralph is still racing for the Lil' Torquey Pistons team as of Cars 3.[1] He competes in the 2016 Piston Cup season, against many new next-generation racers. He can still be seen racing in Los Angeles International Speedway, and then after that, Ralph either retires or gets fired by Lil’ Torquey Pistons and gets replaced by a Next-gen racer named Eric Braker for the 2017 Florida 500. 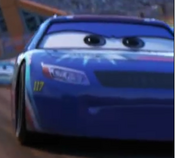