Ramone is an Impala, who is obsessed with painting himself and owns Ramone's House of Body Art.

A true artist isn't afraid to take chances, explore new ways to express themselves, or push the limits of culture. Ramone believes that the automotive body can be a vehicle of expression, which is why every day for Ramone is a new chance to explore new paint jobs and push the limitless boundaries of his art.

In Cars, Ramone constantly repaints himself, and gave McQueen a fresh paint job the day before the race right before his abrupt removal. He, along with the rest of the town, later joined McQueen's pit crew and helped him win the tiebreaker race in California. After that, at some point, he retired from McQueen's crew and usually stays behind during the season.

Ramone owns and operates Ramone's House of Body Art, Radiator Springs' custom body and paint shop. Ramone is an artist - a true magician with paint and metal. There was a time when his only canvas was himself, so he repainted himself daily. But since Lightning McQueen helped put Radiator Springs back on the map, Ramone has had his share of customers - including the star race car himself. Before heading off to the World Grand Prix, Lightning stops by Ramone's for a new paint job, and Ramone gives him a whole new look, even adding a spoiler to him.

Ramone is a fan - a BIG fan. He gave his all to become the official painter for Lightning McQueen. While his idol race car is participating in the World Grand Prix, he eagerly watches the event on the TV in his shop. His moment comes when he sees Lightning in danger. In a flash, he and some of his friends board a plane to England to help him out. How? By blinding one of the lemons with paint. It looks like Ramone will have Lightning home for a long time.

Ramone appears to have replaced Doc Hudson for the reparation of cars, since Doc passed away.

In Cars 2, Ramone greets Lightning when he comes to town. He also helps the lemon, Otis get fixed up. He then later sees Lightning off at the airport. He returns in London with a paint job resembling the United Kingdom flag after McQueen calls him and most of the rest of Radiator Springs about Mater. He also helps Lightning and Mater fight the lemons by spray painting Tubbs Pacer in the eyes.

Mater and the Ghostlight

In Mater and the Ghostlight, Ramone appears in a blue paint job at Flo's V8 Cafe, listening to Sheriff tell the story of the ghostlight.

In Tokyo Mater, Ramone makes another cameo, at Flo's V8 Cafe, after Mater rolls away in his "modifications".

In Spinning, Ramone is part of the crowd watching Guido. He then tells DJ to add some music as Guido shows off his great abilities.

In Cars: The Video Game, Ramone appears as a playable character in arcade mode. He can only be played as when doing a road race. When you enter Ramone's paint shop to change Lightning's paint job, Ramone can be heard making remarks about the paint job you have chosen. He also occasionally appears driving along the road in Radiator Springs.

Ramone is an opponet in the races Radiator Springs Grand Prix, Boostin' with Fillmore, Sarge's Off-Road Challenge and Doc's Check-Up.

In Cars: Mater-National Championship, Ramone is a playable character in arcade mode, and is still seen driving through the streets of Radiator Springs. Ramone also has his own minigame Ramone's Rhythmic Rumble, where you play as Ramone and press the correct buttons to keep Ramone dancing. If you miss a certain number of notes, you will lose the game.

He is an opponent in the races Rustbucket Grand Prix and Wheel Well Circuit, and is the third member of your team in the second race of Luigi and Guido's Team Relay.

Ramone appears during many races, and is a playable character in arcade mode.

In Cars 2: The Video Game, Ramone makes no appearance in the game itself, but is a downloadable character in the Xbox 360 and PlayStation 3 versions of the game. He is in his purple with flames paint job, though he does not appear like that in the second movie.

In Disney Infinity, Ramone appears in the Cars Play Set, as someone who you take missions from. When the Cars vault is opened by having all four characters interact with it, a toy of Ramone can be unlocked for use in your toy box worlds.

As for Ramone's other appearances, he has rarely has huge roles in books or comics, though makes many cameos. However, the book Blue Ramone does focus around him, as he tries as hard as he can to stay blue (Flo's favorite color) for a week.

Ramone is kind and loyal, and is always willing to paint anyone in need. He sometimes is cocky and brags, mainly about his hydraulics.

Although Ramone's color is constantly changing, his "normal" original paint job is purple with yellow-orange flame jobs on his sides and has tiny chrome rims.

Ramone is based off a 1959 Chevy Impala Lowrider.

Ramone is a professional body artist, and owns his shop, Ramone's House of Body Art, across the street from his wife Flo's shop. He paints himself a different color everyday, which had become a habit since the days when there were rarely any travellers in Radiator Springs. How with more business, he enjoys painting great schemes, including his personal favorite, the flame job style.

Ramone: "Hey, how far did you make it this time, Otis?"
Otis: "Halfway to the county line."
Ramone: "Ooh! Not bad, man!"
Otis: "I know! I can't believe it either!"
—When Otis arrives at Ramone's House of Body Art.

Ramoneworldofcarsonline.jpg
Ramone in The World of Cars Online 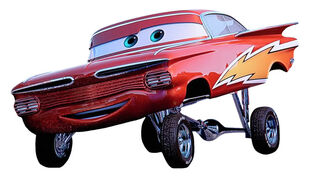 This cool paint job is inspired by Ramone's famous friend Lightning McQueen. Ramone can show support for his friend and look pretty sweet doing it!

Ramone is green with envy today - he's envious of all the other cars who get to see his brand new sweet green paint job. But be careful, you can look but don't touch. This paint job is that fresh.

Ramone calls this look "Mellow Sunset." This morning he was feeling particularly relaxed about the day's schedule. Starting off with breakfast at Flo's, then back to his studio for a few hours of painting, only to quit early for the day and then pick up Flo for a nice drive up to the Wheel Well to enjoy a mellow sunset.

This paint job came out particularly nice. Ramone liked it so much he thought he'd keep it a little longer than a day, but then he came to his senses. 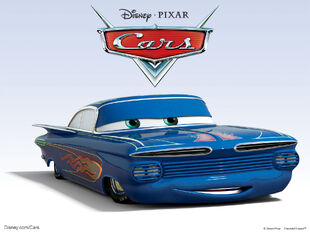 Ramone's paint job from the short Mater and the Ghostlight. 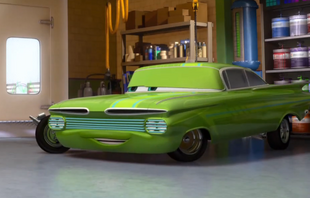 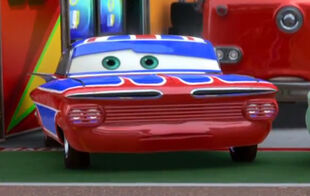 Ramone's paint jobs in Cars 2, when he goes to London. The paint job itself is designed after the Union Jack. 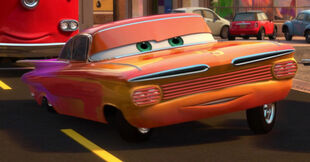 Another paint job from Cars 2, seen at Radiator Springs. 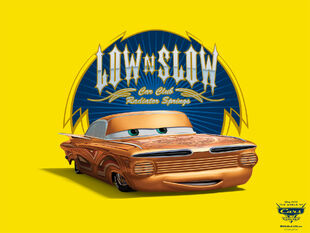 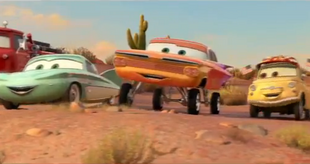 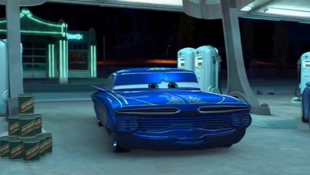 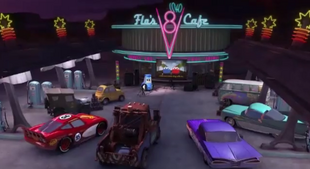 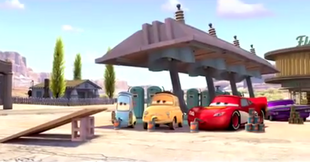 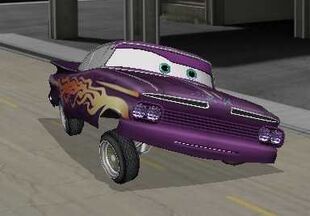 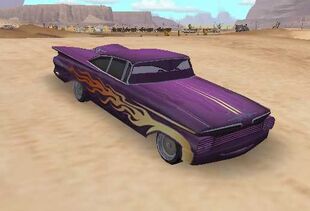 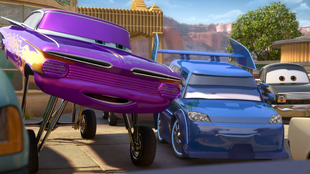 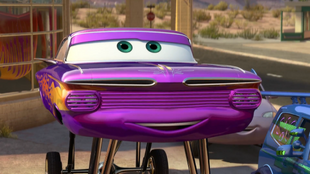 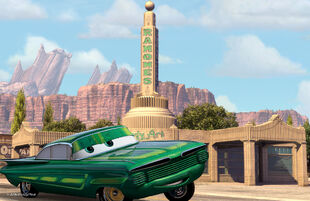 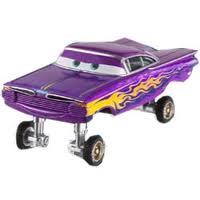 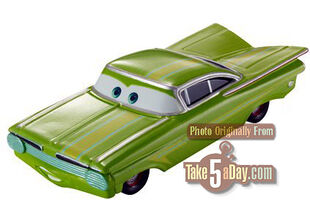 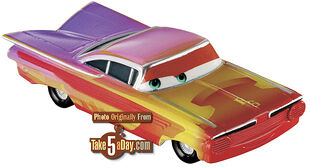 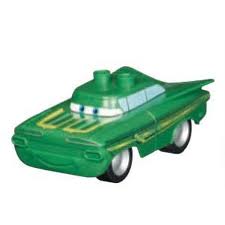 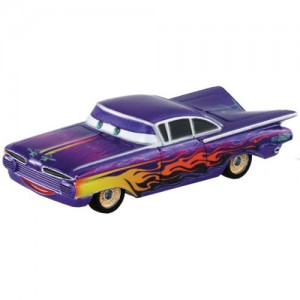 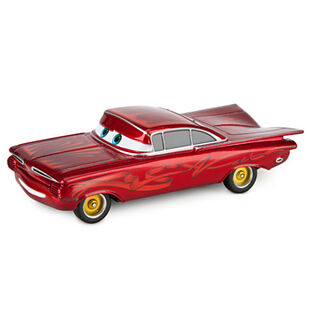 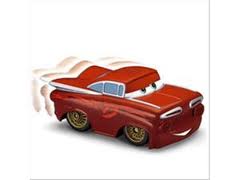 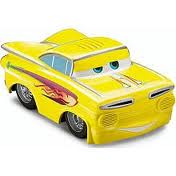 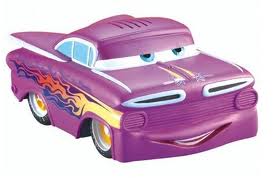 Add a photo to this gallery
Retrieved from "https://worldofcarsdrivein.fandom.com/wiki/Ramone?oldid=55116"
Community content is available under CC-BY-SA unless otherwise noted.