Darrell Cartrip: "The dirt is supposed to be the great equalizer in this race."
Brent Mustangburger: "French rally car Raoul ÇaRoule is counting on a big boost headed through there."
—RSN commentators about Raoul ÇaRoule

Raoul ÇaRoule, also known as the World's Greatest Rally Car, was born in Alsace, France. A restless soul, Raoul joined the famous Cirque du Voiture French circus where he learned Gymkhana – a graceful, drift-filled motorsport that taught him pinpoint timing and an unparalleled ability to navigate tricky courses with ease. He's the first car to ever win nine consecutive rallies. Raoul is confident he can use his rally experience to pull ahead of his fellow World Grand Prix racers during the three courses' touchy dirt sections, especially with his fans in the stands waving banners that read, "ÇaRoule Ca-Rules!"

In Cars 2, he was seen catching up in the dirt section of the race in Tokyo. He was also seen passing Francesco Bernoulli by using the same skill that Lightning McQueen used to pass him. Raoul ÇaRoule (pronounce "raool sarool") is one of the racecars who did not have their motor explode in any of the races. But in the Porto Corsa race, he crashes along with Rip Clutchgoneski into Miguel Camino and Max Schnell, who crashed into Shu Todoroki, because his motor exploded. In the race, he was seen in last place for most of the time. He was the last one who crashed into the big crash that happened at the same time as Rip Clutchgoneski. It was an terrible accident for Raoul, so he must continue his race in London. In that race, he was along with Rip Clutchgoneski, the slowest racer from all. He was seen in 10th place (next to last place). He also appears in the Radiator Springs Grand Prix race near the end of the movie where he passes a lot of cars by driving on the dirt at the side of the road. But he also had good performances, like the 2nd position in the dirt section at the Tokyo race and the 3rd position in the Radiator Springs Grand Prix.

He appears in Cars 2: The Video Game as a playable character.

Even though he so far does not appear in Disney Infinity, he is seen on a picture in Ramone's House of Body Art.

Raoul is painted in the French national colors, blue, white and red, with the letters "GRC" written in blue across the white column. He has chrome rims, in which some spokes are painted red.

Raoul is based on a Citroën C4 World Rally Car. He is also based on Sebastien Loeb's Citroën Hymotion4 WRC.﻿ He has a top speed of 124.3 mph, with a zero-60 of 3.5 seconds. His engine type is a 1.6 liter turbocharger 4-cylinder. He has a horsepower of 300, with an all wheel drive.

Raoul is a French rally car.

"Ha-ha! I will drive circles around them all!"
—One of his lines in Cars 2: The Video Game

Raoul and Rip Clutchgoneski at the Radiator Springs Grand Prix.

Some of Raoul's pitties 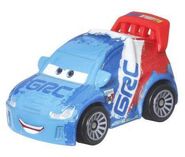 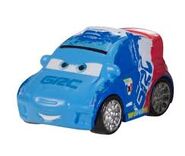 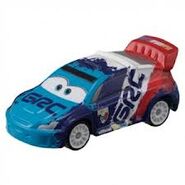 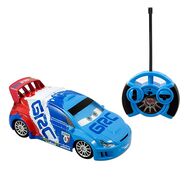 Remote Control Raoul ÇaRoule
Add a photo to this gallery

Retrieved from "https://worldofcarsdrivein.fandom.com/wiki/Raoul_%C3%87aRoule?oldid=55157"
Community content is available under CC-BY-SA unless otherwise noted.