Red may not be a fire truck of many words, but what he doesn't say, he shows through his generous actions. Whether its putting out a tire fire or caring for the beautiful flowers, Red is there to support and protect his beloved town. Red takes negative comments on the town very personally. So if you have something bad to say about Radiator Springs, you'd better watch out, because if there's one thing Red's not afraid of, it's his emotions.

In Cars, Red is very shy and initially didn't like Lightning McQueen, but he eventually took a liking to him.

In Rescue Squad Mater, he appears watering his flowers when Lightning McQueen and Mater were passing him. Then that made Mater decide to make up a story about when he was a fire truck.

Red makes a few cameos in Cars: Mater-National Championship. One of them is on one of the hills in the North Willy's Butte race, where he is seen shooting water into one of the ponds. His other cameo is in level 2 of the Tractor Tipping minigame.

Red might not be part of Team Lightning McQueen, but someone has to tend the flowers he has around Radiator Springs. He makes sure he goes to the airport to wave goodbye to the team! Red is used to putting out fires, but this time he’s been called on to rescue Lightning McQueen and Mater who have been captured on their spy mission in London. But first, he has to take care of Professor Z's henchman, Acer, who is setting fire to everything.

Red reappears in Cars 2. His actor, Joe Ranft died in a car accident during the making of Cars in 2005. In consequence, Red does not speak in Cars 2. In the film, he appears with the other Radiator Springs residents congratulating McQueen on coming back home, as well as at the Wheel Well Motel when Francesco is insulting Mater and McQueen agrees to compete in the World Grand Prix. He only makes a small appearance at the airport, crying as he sees 'Team McQueen' taking off for Tokyo. He comes with most of the rest of the Radiator Springs residents (except Lizzie and Mack) to London after McQueen called them to try to talk to Mater, who was missing at the time. He also appears in the battle against the lemons, where he arrives just in time to blast some of the lemons away, including J. Curby Gremlin and some black Gremlins, with his fire hose and is seen briefly when Mater and the others return to their hometown, and when they are watching the Radiator Springs Grand Prix.

In Kinect Rush: A Disney/Pixar Adventure, Red makes a cameo at the end of the track in the first level of Cars in the game, as well as in the background of the ending cut-scene.

In Hiccups, he tries to cure McQueen's hiccups by shooting water at him.

In Bugged, he plays as the protagonist for the first time, and is voiced by Jerome Ranft.

In Spinning, he makes a short appearance in the crowd while watching Guido performing his spinning moves with a sign.

Red's only appearance in Cars Land is in Radiator Springs Racers. When you drive into Radiator Springs after tractor tipping with Mater, he is seen between Lizzie's Curio Shop and Luigi's Casa Della Tires watering some flowers.

Redworldofcarsonline.jpg
Red in The World of Cars Online

A real life version of Red in The Incredibles

A possible toy version of Red at Sunnyside 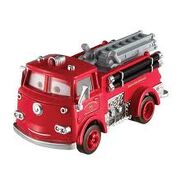 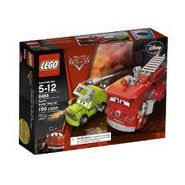 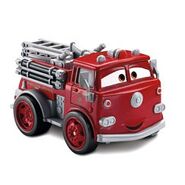 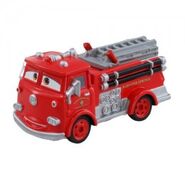 Retrieved from "https://worldofcarsdrivein.fandom.com/wiki/Red?oldid=55096"
Community content is available under CC-BY-SA unless otherwise noted.