Rex Revler is a stock car that used to compete in the Piston Cup Racing Series for the Gask-its team with the number 80. He was replaced by Dan Carcia.

In Cars 3, Rex competes in the Piston Cup Racing Series for Gask-its during the 2016. When Jackson storm made his debut on the track he was replaced by Dan Carcia after the sudden rising popularity of Next-Gen race cars in the sport.

Rex is a Brawny Motor Co. Spark EA stock car. He uses Lightyear racing tires. His eye color is blue. He is painted dark blue with red and yellow stripes coming through his hood and back. His roof is painted in red. On his sides and roof he had blue number 80 with white border with the Gask-its logo on his hood, sides and back. 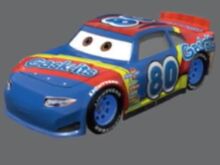