It takes a special kind of pitty to assist a plane like El Chu . . . and Ricardo is just the vehicle for the job. From reading lines with El Chu for the racer's telenovela role to practicing luchador (wrestling) moves to fending off El Chu's adoring fans with said luchador moves, Ricardo has been forced to acquire a varied skill set.

El Chupacabra's pitty makes several appearances in Planes. His first appearance is when he pulls El Chu to the runway of John F. Kennedy International Airport for the first leg of the Wings Around the Globe. Later, he holds up signs to El Chu to go low on the song "Love Machine" when trying to woo Rochelle. After Dusty Crophopper gets damaged during a storm over the Pacific Ocean, El Chu and his pitty turn up with some wings for Dusty as well as El Chu's lunch box. The pitty then moves the lunch box away as El Chu explains to Dusty to not touch it. El Chu's pitty then helps to modify Dusty during the night before the final leg.

Ricardo is painted mostly red, but also has the El Chupacabra logo on both of his doors. He has red rims.

Ricardo helps El Chupacabra with almost everything he does, including being his pitty during races, and assisting him with movie roles.

Ricardo in a comic 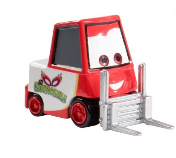 Diecast
Add a photo to this gallery
Retrieved from "https://worldofcarsdrivein.fandom.com/wiki/Ricardo?oldid=150788"
Community content is available under CC-BY-SA unless otherwise noted.