"You think you can beat me?"
— Ripslinger, Planes

Ripslinger is the main antagonist of Planes.  He is a black and green champion racer, who is a bully of the Wings Around the Globe racing circuit. Rude and obnoxious, he and Dusty are serious competitors, and Ripslinger will do anything to humiliate him.

With more wins than he can count and an abundance of fans, Ripslinger is wings-down the biggest name in air racing—and he knows it. But despite sky’s-the-limit funding and state-of-the-art equipment, the world champion still doesn’t play fair—especially when it comes to a small-town plane with zero racing experience. Dusty doesn’t belong in Ripslinger’s sport and his mere presence makes the pro’s fuel boil. And if Dusty’s inexperience doesn’t take him out of the race, Ripslinger’s vast empire includes a couple of underhanded sidekicks to take care of business.

Ripslinger is one of the contestants in the Wings Around the Globe racing competition. One of the most legendary names in racing, Ripslinger gets his wins by simply eliminating his competition. Once Dusty, whom Ripslinger calls Rusty, enters the competition, Ripslinger continues to pick on him about being a crop duster, and not fit for racing of any kind. He usually requires assistance from his two dumbstruck sidekicks, Ned and Zed, who help Ripslinger destroy the other competitors.

Ripslinger hates Dusty Crophopper, a crop dusting plane who wants to compete in the race but is seriously afraid of heights, out of the fact that he thinks that crop dusters are not meant to race. Because of this, Ripslinger along with Ned and Zed plot to disqualify Dusty by cheating in every race. Dusty loses his second race in Germany to save a British plane named Bulldog from suffering from an oil leak, much to Ripslinger's delight. But as Dusty begins to win more and more races during the competition and falling in love with an Indian plane named Ishani, Ripslinger becomes more and more jealous of the crop duster. So as a result during a race over the Pacific Ocean, Ripslinger orders Ned and Zed to destroy Dusty's navigation antenna in order to make him lose communication from the other racers and therefore making him get lost. After he is given spare parts from the other racers including Bulldog, Ishani, and El Chupacabra, as well as his mentor, Skipper due to crashing into the ocean during a storm, Ripslinger and his henchplanes then try to attack both Dusty and Skipper on the way to the finish line of the final race, and once he thinks that he had finally gotten rid of Dusty once and for all, Ripslinger strikes a pose in front of the audience only for Dusty to overtake him and win the race without the villain noticing. But by the time Ripslinger knew what was going on he forgets about where he is going, he ends up crashing into some portable toilets. Because of this, Ripslinger's arrogance and cruel behavior ultimately led to his downfall, and was called "Ripstinker" by Roper.

In the video game, he tries to get Dusty banned from the WATG rally by causing destruction in Propwash Junction, painting graffiti of Dusty on the great wall in a Dusty disguise, as well as attempting to have the other racers turn against Dusty by spraying paint on them. He even causes trouble for Ishani by ruining her favorite holiday the "Festival of Colors", spiking her fuel with his own illegal mixture, and having the Diwali racing festival sabotaged with help from his minions. When his plans to ruin Dusty failed, he destroyed an entire course for the WATG Rally, though it was not left unnoticed due to cameras set up around the course. He was later suspended by a Race Official pitty for his actions until further notice.

Ripslinger has a self-centered and carefree personality, and loves to cheat his way into anything he wants to. He is often rude and likes to play dirty with his fellow racers, usually involving plane crashes. He is especially cruel to Dusty, who in his opinion should not be racing and just stick to what he is good at. Whenever he is busy, he usually seeks help from his two sidekicks, Ned and Zed.

Ripslinger is painted green with black wings and fins, and a "flame" pattern on his headlights and doors.

Ripslinger is based on the Racing Mustang "Precious Metal", which is a modified North American P-51D Mustang fighter with clipped wings and contra rotating propellers. He differs in having two bladed props instead of "Precious Metal's" three bladed props. He is also said to resemble a Messerschmitt BF-109, with elements of the Sharp Nemesis NXT racing plane. His wingspan is 26.2 feet (8 meters).

His propeller is a Skyslycer Mark Five, which is only used for RPX Racing team members. It is a contra-rotating propeller with two blades on each prop.

Known all around the world for his enormous victory numbers, Ripslinger is a very famous racing plane, and captain of the RPX Racing Team.

Ripslinger as Dusty in the video game. 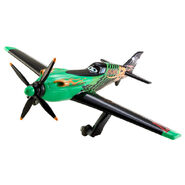 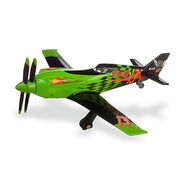 Disney Store
Add a photo to this gallery
Retrieved from "https://worldofcarsdrivein.fandom.com/wiki/Ripslinger?oldid=50507"
Community content is available under CC-BY-SA unless otherwise noted.