River Scott is a Piston Cup racer from the 1950s, with the racing number 34. His character is inspired by the late NASCAR driver Wendell Scott.[1] He is a 1938 Dirt Track Racer. [2] 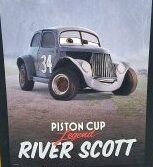 New paint jobs
Add a photo to this gallery

Retrieved from "https://worldofcarsdrivein.fandom.com/wiki/River_Scott?oldid=181322"
Community content is available under CC-BY-SA unless otherwise noted.