Rochelle is one of the racing competitors in the Wings Around the Globe competition.

Rochelle is a tough racer and the pride of the Great White North. Always confident and capable, she got her start running mail to small towns in Quebec, picking up home remedies for mechanical maladies along the way. She also developed a knack for fast travel that ultimately inspired her to give air racing a try. Rochelle never looked back (this competitive contender doesn’t need to). She is relentlessly pursued by charmer El Chupacabra, but steadfast Rochelle is much too focused on winning the race to return his affections.

After El Chu sang his character song "Love Machine" to her, she is head over heels over him.

Rochelle is a tough, confident and a focused racer.

Rochelle is painted white, pink and red. Her racing number is #22.

Rochelle is a famous air racing champion from her home country of Canada. 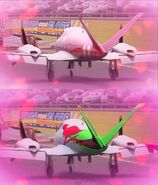 Sakura with El Chu at the start of the last race

Carolina at the first race's start

Compare of all of Rochelle's international changes (excluding China and Japan) 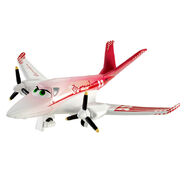 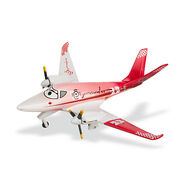 Disney Store
Add a photo to this gallery
Retrieved from "https://worldofcarsdrivein.fandom.com/wiki/Rochelle?oldid=52409"
Community content is available under CC-BY-SA unless otherwise noted.