Rochelle is professional racing plane from Tasmania, Australia. She takes part in racing competitions such as Wings Around the Globe.

She replaces original character of Rochelle in Australian and New Zealand version of film Planes. 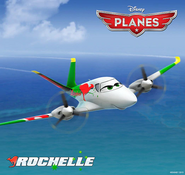