Not to be confused with the song.

Wikipedia has an article related to:
U.S. Route 66

The Route 66, also known as The Mother Road and U.S. Route 66, was a historic route (1926-1985) which diagonally crossed the United States. Also considered as the "Main Street of America", it gave rise to new cultures and ways of life, and got its own unique spirit that was reflected in its towns and residents.

It was the road where McQueen got lost while supposed to be traveling to California. Sheriff, who was on a stakeout at the time, sees McQueen driving down the route at full speed and chases after him.

In Cars, Route 66 is the route that Radiator Springs is on, somewhere in western Arizona or eastern New Mexico. Back in 1965, the town was popular. However, when Interstate 40 was built, Radiator Springs and Route 66 lost its population, and was even taken off the map.

40 years later, Lightning got lost in Radiator Springs and wrecked the road. He was sentenced to fix the road before he could leave. During his stay, he learned about the history of Radiator Springs and Route 66, and realizes that he's been missing a lot. Finally, he fixes the road, but decides to stay a little longer to make a few purchases and get a new paint job. However, his stay didn't last very long when Mack and hundreds of reporters came and took him to the tie-breaker race.

After the tie-breaker, he comes back to Radiator Springs, announcing that the town was back on the map and that he wants to live here. 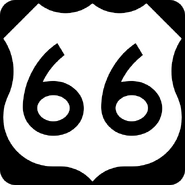 Retrieved from "https://worldofcarsdrivein.fandom.com/wiki/Route_66?oldid=181355"
Community content is available under CC-BY-SA unless otherwise noted.