Ryan "Inside" Laney is a next-generation car who appears in Cars 3 as a rookie racer.[1] His number is 21, and he is sponsored by Team Blinkr. He is a Next-Gen 2017 Race Car SA-2.[3] He takes Speedy Comet's role as the Blinkr racer, and is one of the six rookies to debut in the Piston Cup at the second Motor Speedway of the South race in Cars 3.

In Cars 3, Ryan "Inside" Laney is one of the first six next-gens to replace six veterans at the second race located at the Motor Speedway of the South, having replaced Speedy Comet. He finishes in sixteenth place at the Los Angeles 500. At the Florida 500, he starts in twenty-seventh place. Later, in the crash caused by Cam Spinner, he is seen miscolored, kind of looking like Michael Rotor in a couple of shots, and gets hit by Tim Treadless. But he is seen able to continue racing, and finishes in eighteenth place, while congratulating Cruz Ramirez on her win. 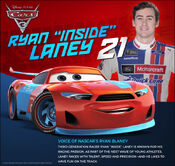 Miscolored Ryan in the crash.

Retrieved from "https://worldofcarsdrivein.fandom.com/wiki/Ryan_%22Inside%22_Laney?oldid=150365"
Community content is available under CC-BY-SA unless otherwise noted.