"That was cool."
—Ryan Laney congratulating Cruz Ramirez after she wins the Florida 500, Cars 3

Ryan "Inside" Laney is a next-generation car who appears in Cars 3 as a rookie racer. [1] His number is 21, and he is sponsored by Team Blinkr. He is a Next-Gen 2017 Race Car SA-2. [3] He takes Speedy Comet's role as the Blinkr racer and is one of the six rookies to debut in the race at the Motor Speedway of the South race in Cars 3. 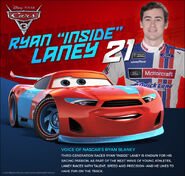 Ryan In the crash

Ryan in the pits

being hit by Tim Treadless
Add a photo to this gallery


Cite error: <ref> tags exist, but no <references/> tag was found
Retrieved from "https://worldofcarsdrivein.fandom.com/wiki/Ryan_%22Inside%22_Laney?oldid=137188"
Community content is available under CC-BY-SA unless otherwise noted.