Scaryator Springs Festival 2010 was a festival held on Halloween 2010 in The World of Cars Online. During this event, Lightning McQueen and Mater helped to decorate the town for the Costume Parade. Ramone's House of Body Art was decorated for this party too, when Mystery Pumpkins came back. There had been zombie cars, and one named Fluffy took control over the blog.

"I'd be happy to explain what our Scaryator Springs Festival is all about!

Of course, like every year, it all starts with the Mystery Pumpkins. If you drive up to a Mystery Pumpkin, you'll... Well, I can't say yet. Mater and Lightning are rigging them right now.

You'll find out next week. For now, it's a mystery!" says Sally mysteriously.

You will see many unusual sights throughout our Scaryator Springs Festival. A lot of new Cars like to dress up in costumes. And then there's those Zombie Cars. Hope they don't come back!

The Banner as seen in Town 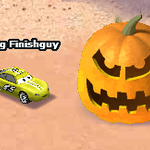 A giant pumpkin in the North East of Radiator Springs found on October 8 which gives the users a free "I survived Scaryator Springs 2010" souvenir. 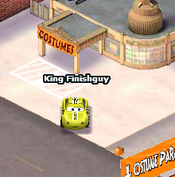 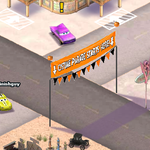 Retrieved from "https://worldofcarsdrivein.fandom.com/wiki/Scaryator_Springs_Festival_2010?oldid=163903"
Community content is available under CC-BY-SA unless otherwise noted.