World of Cars Wiki
Register
Don't have an account?
Sign In
in: Characters, Antagonists, Trucks, buses,
and 2 more
English

He was seen at the end of Mater and the Ghostlight, with Mater in front of him. However, Mater doesn't know that it's the Screamin' Banshee and warns him of him. Then, he says goodnight and drives away, leaving the Banshee very puzzled. 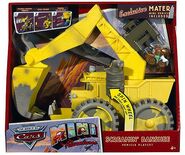