Sheldon Shifter is a next-generation Piston Cup racer who takes over the Sputter Stop sponsorship at the beginning of the 2017 season, replacing the previous racer Murray Clutchburn.[1] His racing number is 92.

After next-generation racers begin to receive attention as a result of their higher capabilities, Piston Cup teams begin replacing their veteran stock racers with next-gen models. Shifter replaces Murray Clutchburn as the Sputter Stop racer. He makes his debut in the Florida 500. 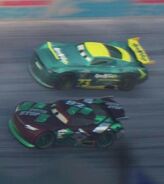 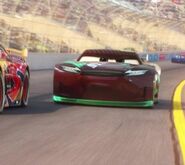 Retrieved from "https://worldofcarsdrivein.fandom.com/wiki/Sheldon_Shifter?oldid=104928"
Community content is available under CC-BY-SA unless otherwise noted.