Sheriff is the local police car in Radiator Springs.

There's a long history of law enforcement in Sheriff's family. His father was a traffic cop. His aunt, his two cousins on his mother's side, his little brother...even his grandfather was a traffic cop, directing traffic at Times Square in New York around the turn of the century. Sheriff always knew he too would be a cop. After all, how many other options did he have with a name like Sheriff?

Sheriff appears in the video game. He first appears in the minigame Sheriff's Chase, where he and Lightning talk about how Lightning wrecked Radiator Springs in the movie. Then Sheriff thinks Lightning is asking for a rematch, and he accepts it, because Doc outfitted him with a turbo charger. If Lightning wins, he won't be thrown in the impound. If Sheriff wins, Lightning will. After Lightning won the race, Sheriff asks Lightning to stop doing doughnuts, and to go away, or he will be picking up trash on the highway.

In Cars: Mater-National Championship, he appears with Otto, as he was speeding. Lightning makes sure that Otto stays out of trouble by racing him, along with Sheriff. Sheriff later appears overhearing Lightning sending Otto to see Lizzie, saying that will keep him busy. He then later appears when Mater spots a tractor and was about to tip it, but gets interrupted by Sheriff. Mater says that he's sorry, then Sheriff says that he does not want Mater to go tractor tipping again, and then he reminds Mater of the Ghostlight, which when Mater wasn't looking, Sheriff puts the blue lantern on Mater's hook.

In Cars: Race-O-Rama, he appears in Sheriff's Chase, which the player has to help him catch some speeders, who are a few of the Chick Hicks Racing Academy students. This is similar to another mini-game in Cars: The Video Game. He is also playable in many other events like races on the console versions.

Sheriff is the local law enforcement and the keeper of the peace in Radiator Springs. He takes his job very seriously. Sheriff enjoys telling stories and taking the occasional nap behind the Radiator Springs billboard. That's where he was when Lightning McQueen first zoomed into town years ago, which led to a messy car chase that didn't end well. These days, Sheriff welcomes the hotshot racer Lightning home to Radiator Springs with all four tires.

In the second film, he watches McQueen leave for the World Grand Prix. When he is called to London by McQueen he aids McQueen and Mater in fighting the lemons by chaining one of them up just like he did to McQueen in the first film.

In Kinect Rush: A Disney/Pixar Adventure, Sheriff appears in the first Cars level, when Mater has the player try to stay close to Sheriff on the course. Sheriff later appears at the end of the course and in the background of the ending cut-scene.

In Cars Land, Sheriff makes an appearance. At the beginning of the ride, Sheriff is announcing the safety rules in English, while Ramone says them in Spanish. Later in the ride, he pulls you over after you almost crash into a train. You think he's gonna give you a ticket, but really, he's helping you get to the big race. He calls for Mater to take you to the race, and Mater does take you there (by tractor tipping).

Sheriff is a 1949 Mercury Police Cruiser.

His license plate reads 001, except in the video game, where it reads SHERIFF. 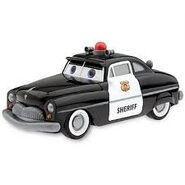 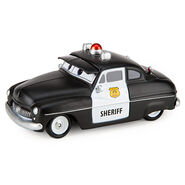 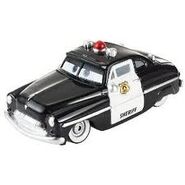 Add a photo to this gallery
Retrieved from "https://worldofcarsdrivein.fandom.com/wiki/Sheriff?oldid=54723"
Community content is available under CC-BY-SA unless otherwise noted.