Start a Wiki
watch 01:38
The Loop (Movies)
Do you like this video?
Shiny Wax, previously known as Waxy Wax, is a wax trademark. This product gives the cars a nice and shiny coat of wax that makes them look brighter and waxy. Darren Leadfoot and Conrad Camber are the proud bearers of this sponsor for the Piston Cup races. 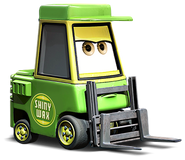 The Waxy Wax logo on a box in Doc Hudson's garage. 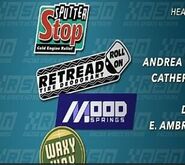 The Waxy Wax logo in the end credits of Cars 3.

Add a photo to this gallery
Retrieved from "https://worldofcarsdrivein.fandom.com/wiki/Shiny_Wax?oldid=162880"
Community content is available under CC-BY-SA unless otherwise noted.