In Cars 2, Siddeley is first seen at the Haneda Airport on his way to pick up Finn McMissile and Tow Mater. During Finn and Mater's chase Acer manages to shoot at one of Siddeley's tires which causes him to pressure Finn to hurry up and get on board of him, which causes Finn to take lead and barely manage to get himself and Mater on Siddeley. While in the air Finn asks Siddeley to take him, Mater and Holley to Paris with Siddeley asking if he sure use his afterburners with Finn confirms him to. After that Siddeley does not make an appearance until the end of the film during the Radiator Springs Grand Prix with Holley stating that he's "gassed, geared, and ready to fly." Siddeley is last seen hovering in the air briefly giving a wink to the viewers and blasts off as the screen fades to black.

In Cars 2: The Video Game, Siddeley doesn't make a major appearance, however, he does appear in the game in one of the buildings in the Airport Arena.

In Planes, Siddeley can be seen at the Mexico City airport during the final stretch from Mexico back to New York City. 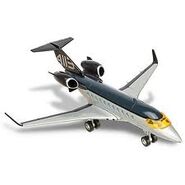