In Air Mater, Skipper is a grey plane who lives in Propwash Junction, a whole town full of airplanes. He runs Skipper's Flight School with his assistant Sparky, and he teaches Mater how to fly. Skipper learns that he can really teach anyone how to fly, guaranteed.

A reclusive old Navy Corsair, Skipper was an ace flier and top instructor of the esteemed Jolly Wrenches squadron until an incident during a combat mission took him off the front lines and left him grounded for life. These days, Skipper keeps to himself, but his quiet existence is turned upside down when an ambitious and persistent Dusty solicits Skipper’s aerial expertise—and gets a few life lessons in the process. But Skipper—who’s never really come to terms with his past—finds that he has a few things to learn, too, and while coaching Dusty to fly faster and smarter, the teacher becomes the student.

In Planes, Skipper appears to be a little judgmental, as he hesitated to teach Dusty how to fly well at first. After Dusty passed qualifying however, Skipper then realized he had been a little harsh and agreed to help Dusty and his friends.

According to an interview with Bobs Gannaway and Ferrell Barron on Planes: Fire & Rescue, Skipper is scheduled to appear, although it is unknown if Stacy Keach will return.

Skipper is painted blue and chrome, with a black prop and a yellow and checkered back tailfin.

Skipper's make model (F4U Corsair) and Skull and Crossed Wrenches insignia on his engine cowling are clearly based upon the World War II US Navy Figher Squadron VF-17 ("The Jolly Rogers"). Skipper even has "VF-17" stencilled on his rear fuselage. In the photo, you can compare Skipper with "Big Hog", the Corsair flown by Cdr Tom Blackburn, CO of VF-17.

Skipper with Sparky at the flight school 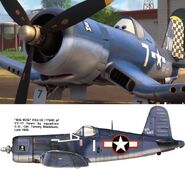 Comparison of Skipper and "Big Hog"

Skipper with Mater in Air Mater

Skipper Riley on the Jolly Wrenches Wall of Fame. 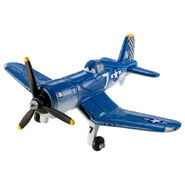 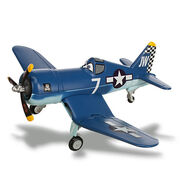 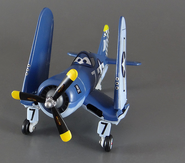 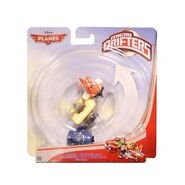 Micro Drifters
Add a photo to this gallery
Retrieved from "https://worldofcarsdrivein.fandom.com/wiki/Skipper_Riley?oldid=51652"
Community content is available under CC-BY-SA unless otherwise noted.