Sparky is a yellow pitty at Propwash Junction, where Mater went in Air Mater. He is Skipper's assistant. He is the owner of the Car-Port and works at Skipper's Flight School.

In Air Mater, when Mater asks Skipper to teach him how to fly and that the sign says that it is guaranteed that he can teach anyone, Skipper gets Sparky to suit Mater up. He does so, and while Skipper is teaching Mater about flight, he moves each page on a drawing stand to show the instructions of how to fly. After Mater was thought to have failed to fly, Skipper orders Sparky to change the sign, but later tells him to put it back after he notices that Mater has actually succeeded and that he really can teach anyone.

Sparky was one of the people in the crowd watching Mater with the Falcon Hawks at the air show after Black Hawk was hurt in the last practice. When Mia and Tia say that Mater is awesome, Sparky explains to them that Skipper had taught Mater everything he knows about flying.

After the short ends (Cars 2 DVD and Blu-ray only), Mater meets up with Sparky in front of Propwash Junction's sign and says that they should make a movie about planes. Sparky then says that's a good idea, and the two look at the audience in anticipation.

In Planes, it is revealed that Sparky was a Navy medic that served on the USS Flysenhower with Skipper. After Skipper's accident, he stayed with Skipper, and still helps him in present day.

In Air Mater, Sparky is painted yellow, with white around his eyes. He wears a yellow cap and a toolbelt. He also has the usual crane arms every pitty has.

In Planes, Sparky has a different livery, where he's gray and has a navy simbol. He has no toolbelt and his cap is a greyish-brownish color and facing forwards instead of backwards. 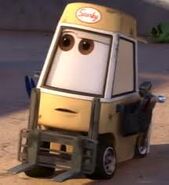 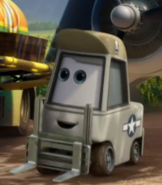 Sparky in his navy paint job in Planes

Add a photo to this gallery
Retrieved from "https://worldofcarsdrivein.fandom.com/wiki/Sparky?oldid=51038"
Community content is available under CC-BY-SA unless otherwise noted.