"You think you're famous now? Ha ha! We'll be rich, beyond belief."
"Mr. Sterling, what is this about?"
"Your legacy. Every time you lose, you damage yourself. I'm sorry. Your racing days are coming to an end."
—Sterling and Lightning McQueen, a Cars 3 trailer

Sterling is the secondary antagonist of Cars 3.

He a billionaire businesscar who purchased Rust-eze, after founders Rusty and Dusty Rust-eze put the company up for sale in order to build the Rust-eze Racing Center, an elite training facility with the latest technology. It appears that he also intends to run Rust-eze out of a personal office at the Racing Center. Sterling made his fortune as the 'mudflap king' of the eastern seaboard. While Lightning McQueen didn't know of him, Tow Mater did, stating that he does "make a quality mudflap at an affordable price."

Sterling proclaims himself to be a big fan of McQueen and is very knowledgeable of his racing career, including that of the racing career of McQueen's mentor, Doc Hudson.

He is a sports car with a silver coat of paint. He is described as "laid back" and "unassuming", though he takes business seriously,[1] and doesn't say things that are "not charming".[2].

He is a Revere Motors Model AG, a car based on the BMW 2000CS. His characteristics can be almost identical to Lots-o-Huggin Bear.

In Cars 3, Sterling brings up the subject of McQueen's retirement while introducing McQueen to a selection of merchandise based on him. He agrees to a deal with McQueen; if he cannot win the Florida 500, then Lightning will have to retire and use his fame to sell Lightning McQueen merchandise. At the Rust-eze Racing Center, McQueen is introduced to Cruz Ramirez, who helps him train to defeat Jackson Storm in the Florida 500. Tex Dinoco however made him an huge offer to buyout Rust-eze from him, which he accepted.

Sterling shouting at Mater to move

Sterling with an employee 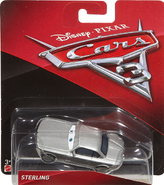 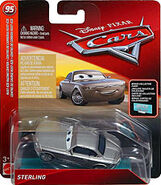 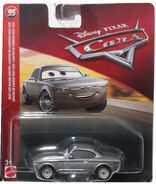 Retrieved from "https://worldofcarsdrivein.fandom.com/wiki/Sterling?oldid=149011"
Community content is available under CC-BY-SA unless otherwise noted.