Steve "Slick" LaPage[1] is a "next-gen" Piston Cup racer currently being sponsored by Trunk Fresh. His number is 34.

Steve competes in the 2016 Piston Cup season in Cars 3. He enters the season as a mid-season replacement for the previous Trunk Fresh racer, Dirkson D'Agostino. Steve makes his debut at the Heartland Motor Speedway and finishes in twentieth place. At the Florida 500, he is involved in the multi-car wreck ignited by Cam Spinner after colliding with him, and then later collides with J.P. Drive. He is severely damaged and does not finish the race, although he is not seen damaged after the crash on the penultimate lap. 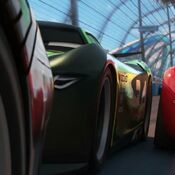 Retrieved from "https://worldofcarsdrivein.fandom.com/wiki/Steve_%22Slick%22_LaPage?oldid=154643"
Community content is available under CC-BY-SA unless otherwise noted.