Strip "The King" Weathers is a former racer.

"The King," Strip Weathers, has seen it all. From his humble beginnings on the Piston Cup circuit, to the glitzy sponsorship and media attention he has today. This seven time Piston Cup Champion is the winningest racecar in all of Piston Cup history. He's loved every second of his racing career, but truth be told, The King is ready for a slower pace. He's looking forward to more time with his queen, Mrs. The King.

In Cars, The King tied for first place with Lightning McQueen and Chick Hicks in the Piston Cup final, so a tie-breaking race was scheduled in California. He races for the team "Dinoco". The King attempts to offer McQueen a dime's worth of free advice, saying it is the crew, not the racer, that wins races. But Lightning was too distracted to pay attention. At the race in Los Angeles, The King led for most of the time until Lightning used a trick from Doc Hudson to get onto the track after Chick rammed him onto the infield during the final lap. After getting frustrated that he wasn't going to win, Chick hits The King and sent him flying through the air above the infield and get damaged upon contact of the ground. McQueen, with a moment of conscience and is fearful that Weathers will be doomed to the same fate as Doc, helped him make it to the finish line, much to everyone's amazement.

In Cars: The Video Game, The King returns as a playable character. While retired, he is still an unlockable character for 12,000 bonus points in Piston Cup races. As a result, Darrell Cartrip's commentary lines include "It sure is nice to have Weathers back on the track!" He is only playable in the Piston Cup races in Arcade and Vs. Modes. Strangely, he doesn't appear in Story Mode. However, he was mentioned in the cutscene for Palm Mile Speedway where Darrell Cartrip says that it's now gonna be Lightning vs. Chick with the King retired.

His stats are 5 for speed, 4 for acceleration, 3 for handling, and 4 for stability.

In Disney Infinity, The King appears many times as a racing opponent. He also appears in some cutscenes, including one where he talks to Luigi.

The King is kind and caring about others, much unlike Lightning McQueen.

The King is painted Dinoco Blue, with the Dinoco sponsor and number "43". On his trunk, he has a giant, tall blue spoiler.

Strip is based on a 1970 Plymouth Superbird with a 426 ci hemi (about seven liters) engine, the same model Richard Petty drove. The Superbird was a heavily modified version of the Plymouth Road Runner, specifically designed for stock car racing. Its radical design was later banned by NASCAR. The King features slightly bigger wheels and a shortened wheelbase - an edit only for the film to make the car more visually appealing.

The King was a seven-time Piston Cup champion, before retiring.

Junior: "Hey, King! Good luck in your last race. You've sure been an inspiration to me."
The King: "Thanks, Junior. Appreciate it."
Mrs. The King: "Hey, be careful out there, OK?"
The King: "Yeah, man."
—The King, Mrs. The King and Junior, before The King's last race

The King on the MSS

The King racing with Chick on his tail

The King talks to McQueen.

The King before his wreck.

The King after his wreck

The King in his crash on the LA Speedway
LyndaWeathers.png

The King in Cars: The Video Game

The King on the character select screen in Cars: The Video Game

A promotional image of The King racing with Lightning and Chick 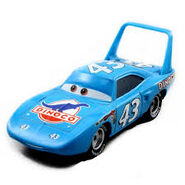 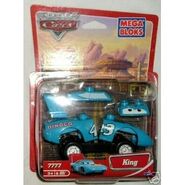 Add a photo to this gallery
Retrieved from "https://worldofcarsdrivein.fandom.com/wiki/Strip_Weathers?oldid=56159"
Community content is available under CC-BY-SA unless otherwise noted.