Suki is a small drift car.

In Tokyo Mater, Suki is first seen with Komodo after Mater drops Ito-San off in Tokyo. She is later seen attending Mater and Kabuto's race before it starts, being shocked at the fact that the loser of the race will become stock. At the end, she laughs with the rest of the crowd at Kabuto after he was turned to stock.

In Cars 2, Suki is first seen in the traffic on the streets after Lightning McQueen and his team arrive in Tokyo. She is later seen at the World Grand Prix welcome party in Tokyo. She is on a bridge with Kabuto, Yokoza, Ichigo, Chisaki and Harumi.

Suki is painted white pink rims and a "hair tie" spoiler, with blue painted on her doors. She also wears lots of makeup, like maskara. 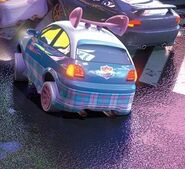 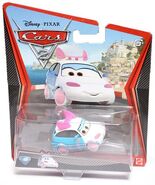 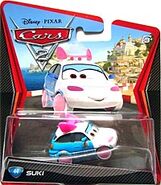 Add a photo to this gallery
Retrieved from "https://worldofcarsdrivein.fandom.com/wiki/Suki?oldid=154779"
Community content is available under CC-BY-SA unless otherwise noted.