Switcher is a race car. He is painted black, with the number 87 painted in white on his doors.

Switcher is a race car who races in the Race-O-Rama series, and a student at the Chick Hicks Racing Academy. Just like his teacher, Chick Hicks, he is a ruthless competitor, who will cheat his way to the finish line. During a two-car race for the Silver Tailfin trophy, Switcher often causes trouble for Lightning McQueen when racing, like using an oil slick. Unfortunately, Switcher is double-crossed by Chick before the race is over, but that trick causes Chick to lose the race, making McQueen and Mater the winners. 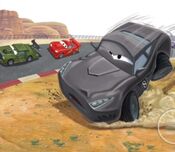