The Crippler is a monster truck.

The Crippler is a hospital monster truck who wanted to challenge Lightning. When Lightning was turned into a monster truck, The Crippler and Ginormous got scared, but Count Spatula said McQueen needed the mental fortitude. McQueen later proved them wrong.

In Cars: The Video Game, he is a member of the monster truck gang, with Count Spatula and Ginormous. The gang challenges Lightning to a race, but Lightning doesn't have the right tires, so he goes to Luigi and Guido at Luigi's Casa Della Tires to get monster truck tires. His new tires made him and Ginormous scared, but Count Spatula said he needed the mental fortitude. Lightning proved them wrong in the race by winning it.

He is not playable in arcade mode, and he only appears in Monster Truck Mayhem.

In Cars: Mater-National Championship, in story mode, the Crippler appears in Monster Truck Waypoint Races 2 and 3, but not the first one. Like in the original game, he is not a playable character.

In Cars Race-O-Rama, the Crippler appears in all 5 Monster Truck Races. Even on the PlayStation 2 version of the game, he appears in all 5 races. However, he is not playable in this game either.

The Crippler is painted white, with tailpipes and a siren on his roof. On his doors, he has some sort of a design or word. He also has a black grille, headlights, and hydraulics that connect his chassis to his giant tires. 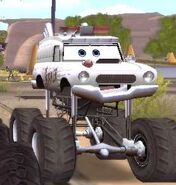 Add a photo to this gallery
Retrieved from "https://worldofcarsdrivein.fandom.com/wiki/The_Crippler?oldid=55084"
Community content is available under CC-BY-SA unless otherwise noted.