"Have y'all met each other? Queen, McQueen. McQueen, Queen!"
—Mater, introducing The Queen to Lightning.

The Queen is the queen of England.

With the final stage of the World Grand Prix racing through the historic streets of London, UK, the Queen is quietly elated she was invited to preside over the finish line by Sir Miles Axlerod. Painted in shades of the most royal blues and never without her jeweled crown, the Queen is the definition of decorum and regality, but that doesn’t mean she doesn’t enjoy a bit of first-rate competition!

In Cars 2, she appears at the London race. When everyone sees the bomb on Mater, they try to get the Queen away. But when Mater claims to know the mastermind of the lemons, she wants to stick around, until it was 15 seconds before the bomb explodes. At the end of the film, she knights Mater. Mater also introduces her to Lightning McQueen and Finn McMissile.

In Cars 2: The Video Game, she appears in the London race on her throne watching the race. While racing, the player can break through the gate and drive past her. She can also be unlocked by downloading her for the PS3 and Xbox 360. The Queen can only race and cannot battle.

She is a 1953 Royalcraft Mark II. She is also modeled after an old Rolls-Royce Phantom IV.

The Queen's license plate is DEII 1952. It includes Elizabeth II's initials and the year of the start of her reign.

The Queen with Miles Axlerod and her grandson Prince Wheeliam

The Queen with Sir Harley Gassup. 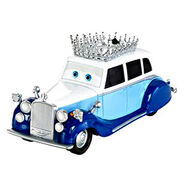 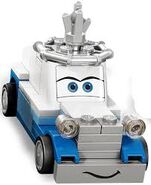 LEGO
Add a photo to this gallery
Retrieved from "https://worldofcarsdrivein.fandom.com/wiki/The_Queen?oldid=51630"
Community content is available under CC-BY-SA unless otherwise noted.