Todd "The Shockster" Marcus was a stock race car. He was professional racing driver who competed in Piston Cup Racing Series for No Stall team with number 123.

Todd Marcus is a stock race car from Dieselton, Alabama, United States. He was the only inhabitant of the Dieselton to ever became professional racing driver. He has the number 123 as his competition number because it was the easy to remember. He also used that number as his ATM number, internet login, home security code and safe combination.

He competed in Piston Cup Racing Series for No Stall Racing team with Roman Dunes as his crew chief and Shirley Spinout as one of the mechanics. He took part in 2006 season of the racing series including the final race of Dinoco 400 at the the Motor Speedway of the South in Motor City, United States. During that, he stayed around 20th position until Chick Hicks caused a large accident between all competitors besides himself, and Strip Weathers. During the wreck, Todd hit Ernie Gearson before spinning out of control and bumping into Claude Scruggs, after what, the two found themselves roof-to-roof. Though Todd suffered some physical damage, he was still able to race, and returned to the fray after a pit stop, finishing the race in the middle of the pack.

He competed in the series until season 2016 when, after the rise of technologically advanced series of race cars, known as the next-generation, he got replaced by new racing driver, Jonas Carvers.

Todd was an Axxelo Fission and used Lightyear tyres. He had blue-silver eyes.

In 2006 he was painted red, with a black spoiler and lining. He had the No Stall logo on his hood and fenders, along with the number "123" painted in white on his doors and roof. In addition to his own sponsor, he also had stickers of other sponsors on his sides near the front wheels. In 2016 his painting was changed adding blue colour.

Appearances in the video games

In The World of Cars Online, Todd was one of the race opponents at the Tailgator Speedway, along with Lee Revkins and Johnny Blamer.

In Cars: Fast as Lightning, Todd is the first unlockable, playable character, made available once both tutorial races have been completed as Lightning McQueen. Marcus comes to Radiator Springs to race against McQueen, who he cites as one of his idols.

Todd owns his own track called Todd's Track, where players can earn all of Chick Hicks' stickers by emerging victorious from races against Fillmore, Tow Mater, Flo, and Chick Hicks. Todd's Pit is unlocked alongside him, which is where Marcus resides in the player's town.

Todd has two unlockable paint jobs, Rookie Green and Golden Champion, which can be unlocked by earning stickers in practices races at Todd's Track. 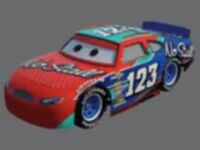 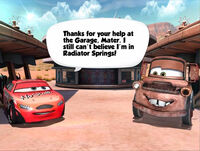 Retrieved from "https://worldofcarsdrivein.fandom.com/wiki/Todd_Marcus?oldid=180520"
Community content is available under CC-BY-SA unless otherwise noted.