Start a Wiki
watch 01:27
The Loop (Movies)
Do you like this video?
The Tokyo Circuit is the first race in the World Grand Prix. The circuit is a spectacular street circuit located in Tokyo. The race is the only race in the World Grand Prix that takes place at night. The circuit goes through the main straight, passes in front of the Imperial Palace in the park (the rally dirt track), goes through the street`s of Tokyo, then passes on a 360° loop and then on the Rainbow Bridge, so called because it emits colorful lights. After they head back to the main straights.

Max Schnell's engine got fried at the end of the race

Rip Clutchgoneski's engine got fried in the middle of the race 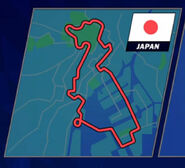 The tunnel (Francesco's onboard camera)

The main straight and the pits
Add a photo to this gallery
Retrieved from "https://worldofcarsdrivein.fandom.com/wiki/Tokyo_Circuit?oldid=153030"
Community content is available under CC-BY-SA unless otherwise noted.