Top Down Truckstop is a truckstop located on the highway Mack and Lightning McQueen take to California.

In Cars, right after the "Life is a Highway" scene, during the travel, Mack is tired and wants to stop. He is longing to go over to the Top Down Truckstop, but Lightning convinces him otherwise, wanting to hurry up and get to California so he can gain sponsorship from Dinoco.

In the deleted scene Top Down Truckstop (an alternate way of Lightning McQueen getting separated from Mack which takes place at the Top Down Truckstop), Mack has to go to the car wash, and says he'll be back soon. Lightning gets impatient, so he goes out and looks around. He gets mobbed by fans immediately, including Mia, Tia, Rusty and Dusty. Getting distracted, he doesn't notice that Mack is energetic again and driving away. So Mack and Lightning were divided. Lightning drives after him, but ends up on the wrong side of the road. He tries to turn around, and by the time he ends up on the right side of the road, he cannot see Mack anymore.

Top Down Truckstop makes a brief appearance in Heavy Metal Mater where Mater and his band Mater and the Gas-Caps perform their first gig. Mia and Tia, who are waitresses, ask them if they have a record, which inspires Mater to record a song.

Heavy Metal Mater, Mater and the Gas-Caps in concert 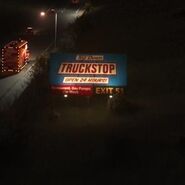 In Cars 3
Add a photo to this gallery
Retrieved from "https://worldofcarsdrivein.fandom.com/wiki/Top_Down_Truckstop?oldid=107403"
Community content is available under CC-BY-SA unless otherwise noted.