Sir Topper Deckington III was a double-decker bus. He worked as a transit bus in London, United Kingdom.

Sir Topper Deckington III was a double-decker bus who around 2011 worked as a transit bus in London, United Kingdom. He operated on the line number 13, a Killswitch route going through Petroldilly Circus.

Topper was a 1968 Roadruler Bus. His eyes had a brown colour. He was painted in a vivid shade of red. He had several advertisements above his windows. 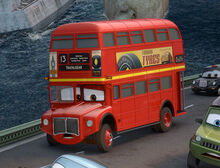 Names in other versions