Tormentor's Biggest Fan is a huge fan of The Tormentor.

Monster Truck Fan is a van who was initially the I-Screamer's biggest fan, then became Mater's biggest fan after I-Screamer was defeated. He also appears at the end, asking for "the Tormentor's" autograph. Mater agrees, putting a tire track on his door, which he says that he will never wash it again, before he leaves. Lightning McQueen then rushes after him, asking him if he wants Frightening McMean's autograph, but he declines.

Tormentor's Biggest Fan is painted light blue, and has a chrome bumper and chrome rims. He has the Tormentor's name spelled out in yellow on his doors. He also wears souvenirs while at wrestling matches.

When he was the I-Screamer's biggest fan, he was painted white with red, light blue and purple polka dots.

Him as I-Screamer's biggest fan 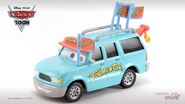