Tow, sometimes referred to as Race Tow Truck Tom, is a tow truck for the Piston Cup.

As the official tow rig of the Piston Cup circuit, Tow has pulled his share of battered, weeping champions of the track. He's seen the top racers in their lowest moments, but he always respects their privacy.

In Cars, Tow is seen at the Motor Speedway of the South among several other tow trucks with the same model and color. He later appears towing Chuck Armstrong off the field after the gigantic crash caused by Chick Hicks.

Tow is painted blue and yellow, with the Piston Cup logo on his doors. He has a yellow tow cable.

Tow is a Houslital Crew Cab.

Tow as seen on a poster 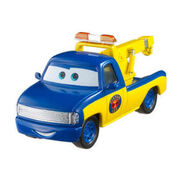 Meet the Cars Artwork.
Add a photo to this gallery
Retrieved from "https://worldofcarsdrivein.fandom.com/wiki/Tow?oldid=150143"
Community content is available under CC-BY-SA unless otherwise noted.