UNO is a popular card game that is sold in many variations, some of which include licensed versions. In the game, the first player starts by placing down on a card, and the next player must place down a card of the same number or color. The player's goal is to be the first to use all of the cards in their hand.

There are three Cars versions of UNO that have been released; one in 2006 based on Cars, one in 2011 based on Cars 2, and one in 2017 based on Cars 3. The rules of the game remain the same, but the cards instead have Cars characters on them. 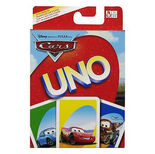 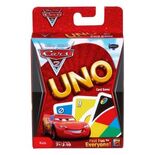 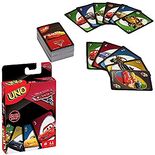 Retrieved from "https://worldofcarsdrivein.fandom.com/wiki/UNO?oldid=123236"
Community content is available under CC-BY-SA unless otherwise noted.