Uncle Topolino's Band are a set of pitties that perform in Italy.

Uncle Topolino's Band are a band of 4 musician pitties that play several different instruments in Italy, and live at Santa Ruotina, Luigi's hometown. The band includes a green accordion player, an orange stringed instrument player, a red tuba player and a yellow drummer.

In Cars 2, they are seen outside TopOlinos, playing their instruments.

Each pitty is an Alza Tutto Forklift, inspired by the design of the 1959 BMW Isetta. 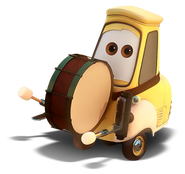 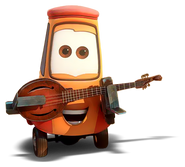 Add a photo to this gallery
Retrieved from "https://worldofcarsdrivein.fandom.com/wiki/Uncle_Topolino%27s_Band?oldid=138626"
Community content is available under CC-BY-SA unless otherwise noted.