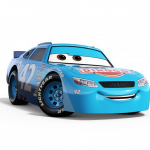 Hi guys!I may be new here but I am not a next-generation racer.I am with

the veteran racers.I am a huge cars fan too.Unlike Cal Weathers, I have not retired yet but I know what it feels to become a veteran,get replaced or to retire as most of my friends did.

I shall come back definitely in November 2017 as I am busy and won't be available at all because I will be racing and I want to make everyone proud,my parents,family,friends including Danesty Lewis,Jackson Storm and Domingues Patrick.

I chose to choose Cal Weathers as my nickname and as my profile picture as I can refer to him as being me in the Cars world.He seems to be someone good and who likes challenges.

One thing that I have in common with the Cars franchise,it is as if showing to me what I have gone through all these years and even the story is likewise to my life although I never know John Lasseter but I would like to thank him though.

Well,like Cal Weathers,I am a veteran on the track now.

If you wish to know more about me,see my blogs.

Oh yes,I won a piston cup in my rookie year!Don't underestimate me when Tex tells you that I was not good.

I simply love Dinoco as a sponsor and its team is wonderful.It was shown in Cars to be the most coveted sponsor.I do wonder if it is the same in Cars 3.I started to like Dinoco (sponsor) when seeing Cars repeatedly.I would always watch especially the final race of the 2005 Piston Cup racing season at the Motor Speedway of the South, where thirty-six race cars were competing for the Piston Cup trophy and the Dinoco sponsor.

On this wiki, I made a new friend named Jackson Storm. We are best friends on this wiki and we act like we were brothers.He is cool,great and fun.Furthermore as he is a rookie,I help him in his journey towards the piston cup and he helps me to beat the other next-generation of racers.Later on,we met a guy named Liu0830 who is great too.We form a great team altogether!

However I am not here to be on the leaderboard but to help the community positively and to add informations and details that they miss.This is not a game but something very important.

My favourite places in the World of Cars

My favourite Characters in the World Of Cars

Retrieved from "https://worldofcarsdrivein.fandom.com/wiki/User:Cal_Weathers?oldid=87362"
Community content is available under CC-BY-SA unless otherwise noted.