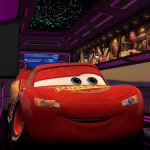 Greetings!This is Danesty Lewis /dænisti luis/, and you all can call me Dany.A big fan of Cars and Planes franchise.I'm a university student aged 18 (2017.8.30 is my 18th birthday).

The definition of my name

This is my name used on the internet,not my real name!My first name is "Danesty",which is a mixture of Dusty and plane.It means a plane called Dusty, who is my favorite character in Planes series.My last name is Lewis referring to my original Chinese last name "Liu(刘)".

My avatar and picture

My avatar is Lightning McQueen because he's my first favorite character. I choose Long Ge as my picture mainly because he has the same nationality. Just as Cal Weathers recommends, he's the most suitable character for me.

How I know about Cars

In February , 2014,my little cousin invited me to his room to see the movie Cars 2 (because he loves race cars). At first sight of it, it occurred to me that I watched the first Cars movie in my childhood. So I decided to watch the first movie again. What made me feel unbelievable is that I absolutely fell in love with this movie! What impresses me most is Lightning McQueen. I have to admit that there are lots of stuff I should learn from him. He's so handsome and cute!Now, I have many Cars characters collections in my bedroom.

In April, 2014, I discovered a movie which is very similar with Cars by coincidence. Yes, as you can guess, it’s Planes. But I thought it not good enough and made by Pixar at first. Before long, I found that it’s made by DisneyToon Studio. When watching the movie, I thought that it was great! Dusty is cute and handsome, too. I’m similar with the main character Dusty Crophopper, and then I had my own great dream and made efforts to achieve my goals. He inspires me a lot, and I really achieve a lot of things in reality! These are my main reasons why I love the movies.

Charlie Puth:See you again ; We don't talk anymore ; Attention ; One call away ; Some type of love ; River ; Through the fire ; Marvin Gaye ；Does it feel ; Dangerously

Taylor Swift:We are never ever getting back together ; I knew you were trouble ; Red ; Blank space ; Sparks fly ; You belong with me ; Back to December ; Welcome to New York ; Shake it off ; Wildest dreams ; Bad blood ; Speak now ;Begin again ；enchanted

Justin Bieber:Baby ; As long as you love me ; let me love you

Michael Jackson:Beat it ; We are the world ; Heal the world ; You are not alone ; Billie Jean

Darin:Be what you wanna be

Adele:Some one like you ; Rolling in the deep ; Hello

Kelly Clarkson:Because of you; Stronger

Rachel Platten:Fight song ; beating me up

Westlife:My love ; nothing's gonna change my love for you ; You raise me up

Groove coverage:God is a girl

M2M:Pretty boy ;The day you went away

Cars:Find yourself ; Real gone ; Life is a highway ；Route 66 ; Our town

Planes:Nothing can stop me now ; Fly ; You don't stop NYC

Planes Fire and Rescue:Still I fly ;All in ; Runway Romance

Fast and furious:See you again ; Ride out ; Go off ; Good life

American style.I could use fork,spoon and knife at about 5,shortly after I learned how to use chopsticks.My favorite food is steak.In addition,I love mashed potatoes,pizza,spaghetti and pork chop ,chicken and soup.

Retrieved from "https://worldofcarsdrivein.fandom.com/wiki/User:Liu0830?oldid=104171"
Community content is available under CC-BY-SA unless otherwise noted.