Will Rusch is a next-generation sports car. He is a racer who, since 2017, has been competing in the Piston Cup Racing Series with the number 76 for the Vinyl Toupee team, replacing Rev Roadages.

Will Rusch is a sports car that lives in the United States. He's a professional racing driver. In 2017, Rusch joined the Vinyl Toupee racing team in the Piston Cup Racing Series, where he replaced Rev Roadages. He competed in the Florida 500 at the Florida International Super Speedway, where he started in 34th position and quickly got passed by Lightning McQueen, falling to the last position.

Will Rusch is a Next-Gen 2017 Race Car SB-4. He has a purple livery with yellow on his bumper and sides. He has the number 76 and a wireframe design on his sides. He also has the vinyl top on his roof, like all of the Vinyl Toupee racers. 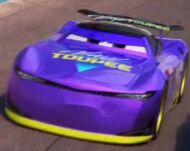