Windlifter's personality bears a resemblance to that of Skipper's, as they are both grumpy and talk lower and quieter.

Windlifter is painted almost entirely green, except for one white stripe that wraps around his body. He has a removable cargo hold that attaches to the bottom of him.

Windlifter works as a member of the Smokejumpers, protecting Piston Peak National Park from the dangers of wildfires. 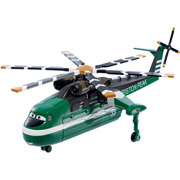 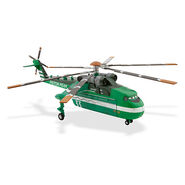 Disney Store
Add a photo to this gallery
Retrieved from "https://worldofcarsdrivein.fandom.com/wiki/Windlifter?oldid=57180"
Community content is available under CC-BY-SA unless otherwise noted.